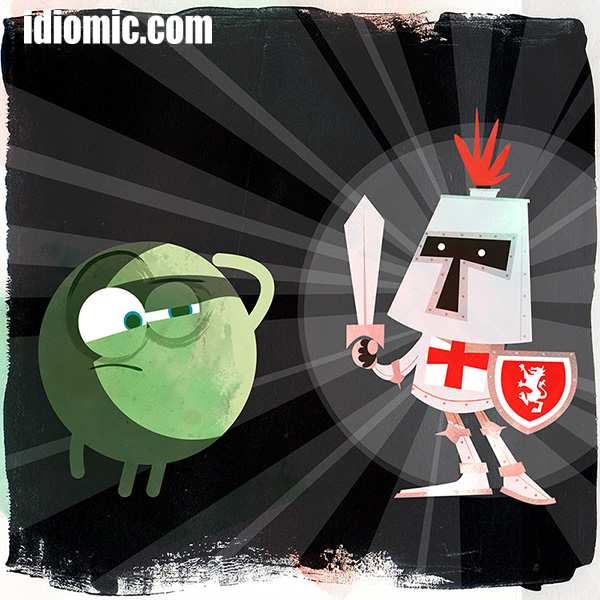 Definition: Somebody who comes to the aid of another, especially a man coming to a woman’s aid.

Example: Belinda’s knight in shining armour came in the form of a vending machine repairman. She’d had her arm caught in the machine for three hours. And she still hadn’t been able to reach that Mars bar.

A knight in shining armour (or armor if in the States) owes its existence to the romanticised ideals of Victorian painters, poets, and novelists. Tales of knights in gleaming suits of armour rescuing fair maidens from all manner of evil proved popular at the time, especially stories of Camelot and King Arthur. Everyone had a go. Le Morte d’Arthur was re-printed after an absence of centuries. Pre-Raphaelite painters like Edward Burne-Jones created images infused with light. Tennyson wrote romantic poetry about Arthur. Even Mark Twain visited the tale in a more satirical form with A Conneticut Yankee in King Arthur’s Court.

The reality was entirely different. Suits of armour rarely gleamed unless they were royal showpieces. They rusted. Their occupants washed infrequently. In the sunshine, the temperatures soared inside the suit. As it took ages to put armour on, those same occupants could not afford the time to take them off for toilet related activities. You could probably smell the knight coming before you heard the ragged breathing of his overloaded horse.

As for the damsels in distress… with all the various forms of pox, poor diet, and questionable personal hygiene of the age, Iddy’s not sure how fair they would have been…..

This idiom was requested by Carsten. Hope your students enjoy it!