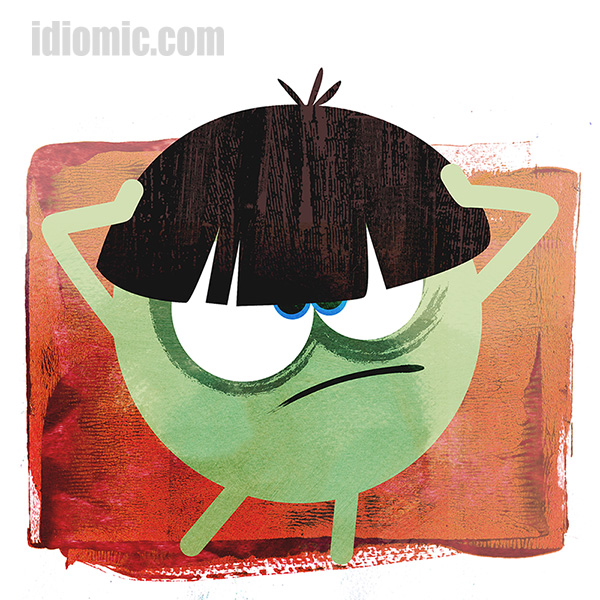 Example: “Keep your hair on!” Bill’s wife said to him. It was easy for her to say. It wasn’t her moped that had been stolen.

There have been a number of similar expressions over the years, advising people to keep something on. There’s been ‘keep your shirt on‘ and ‘keep your hat on‘. Both of these possibly have to do with losing your cool and getting into an actual fight. In that case, you may indeed take your hat or shirt off in preparation. After all, you wouldn’t want to damage that hat, or get blood on that expensive shirt. That sort of prep probably wouldn’t include your hair, unless of course, it was a wig. Surely then the phrase should be ‘keep your wig on‘…

It may have to do more with frustration and worry, rather than outright anger. Long term worrying can lead to hair loss. Frustration can lead to some folks literally pulling their hair out.

Whatever the case, Iddy can’t relate to this idiom at all. Despite the fact that he’s basically one big ball of anger, frustration, and worry, he’s never had any hair to lose. 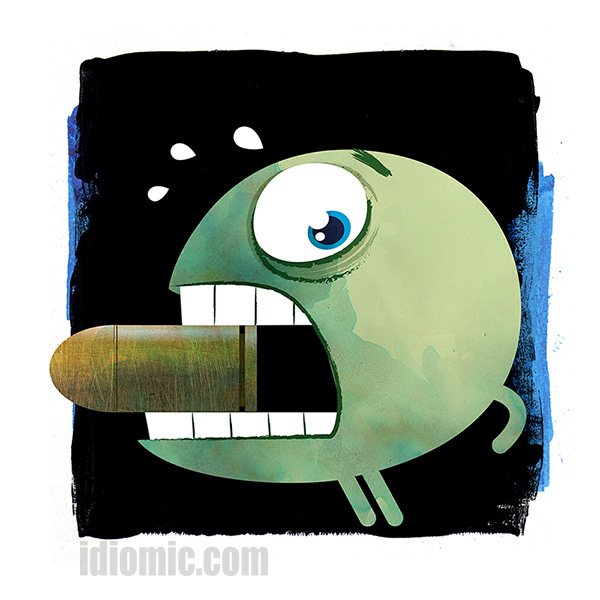 Definition: To accept the inevitable and proceed bravely.

Example: Despite the risk, John decided to bite the bullet and tell his landlady that he had sat on her cat.

The most widely expressed theory for this idiom is that it came from battlefield surgery, that patients in field hospitals were encouraged to bite down on a bullet during surgery to help deal with the pain and muffle their screams (nice.), but this seems unlikely when studied in further detail. There are no specific written accounts of this ever happening, and the choice of a bullet seems pretty poor. A leather strap or stick of wood would have been more effective, and less likely to be swallowed as well!

Another theory, also militarily grounded, is that it originated from the Indian Rebellion of 1857. When new rifles were issued to the Indian Sepoy fighters, they included greased paper cartridges that held the powder. These had to be bitten open. The Sepoys objected, not because it tasted horrible (which it probably did), but on religious grounds. The Hindu fighters feared the grease was derived from cows, and the Muslims feared it was from pigs. They were ordered to ignore their religious qualms, and thus ‘bite the bullet’.

Sounds great, doesn’t it? Alas, it seems the phrase predates this period of British colonialism.

So, we’re still no closer to nailing this one down.

Iddy doesn’t really care. He just wants to get the explosives out of his mouth! 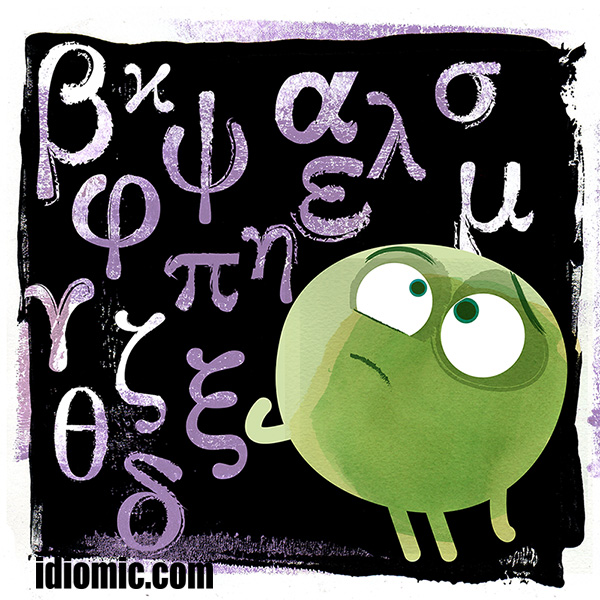 Definition: Something you cannot understand, usually because it is so complicated.

Example: When asked by his algebra teacher to solve the equation, Mike just shrugged and said, “Sorry. It’s all Greek to me!”

It is widely thought that ‘all Greek to me’ derives from the Latin phrase ‘Graecum est, non legitur or Graecum est, non potest legi’.  How’s your latin? Iddy’s is a bit rusty, but he did eventually translate it: ‘It is Greek; it cannot be read‘. Those Romans. Already dismissive of the civilisations before them!

Its modern form began to creep into the English language in the sixteenth century. Similar phrases appear in plays by Dekker  and some fellow called William Shakespeare.

This idiom has many different variations in languages around the world. After all, Greeks are not likely to use it, are they? They in fact say ‘This strikes me as Chinese‘. Here a sampling of other language variations:

Italian: To me, this is Arabic.

Slovakian: This is a Spanish village to me.

Comparing the incomprehensible to the Chinese language is by far the most common. Hungarian, Hebrew, French, Dutch, and Arabic, to name but a few, use variations on ‘Sounds Chinese to me‘. Not to be outdone, English writing is sometimes referred to as ‘chicken intestines‘ in Cantonese.

Finally, this idiom has a link to the Spanish term ‘gringo‘, slang for somebody not of Spanish origin or non-Spanish speaking. It is a shortening of ‘hablar en griego’. Translation? ‘Speaking in Greek.’ 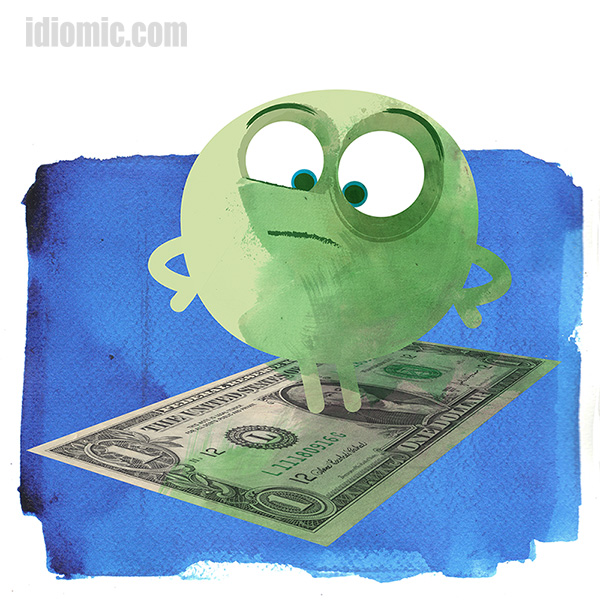 Definition: Something exactly correct: a place, an idea, or an amount

Example: Kevin’s  frisbee throw was on the money. It was a shame that Lennie wasn’t looking at the time. The doctor told Lennie to come back on Thursday to have the stitches removed.

‘On the money’, or ‘right on the money’ as it also often expressed, is among several idioms about exactitude. There’s ‘on the mark’, ‘on target‘, ‘on the dot’, and ‘spot on‘ to name a few. Those idioms probably have roots in archery. They all express hitting the centre of a target which is usually marked with a spot or mark.

‘On the money’ does not come from the same root. Most sources agree it has to do with horse racing, specifically the related bets. A winning horse would be ‘on the money‘. A losing one would be ‘out of the money‘.

Iddy has heard one other explanation, that it has to do with surveying. Surveyors sometimes hammer a metal ‘benchmark’ rod into the ground at a precisely defined position. Sometimes these rods are difficult to see through the viewfinder of their transit (the viewing equipment on a tripod you will have seen surveyors using). A coin placed atop the benchmark would make the rod easier to see. So, when they lined up the coin in their viewfinder, they would be ‘on the money’.

Iddy doesn’t know if there is any truth in that one, but he likes it anyway.

Right now he’s trying to figure out which shop would accept the giant note he’s found….