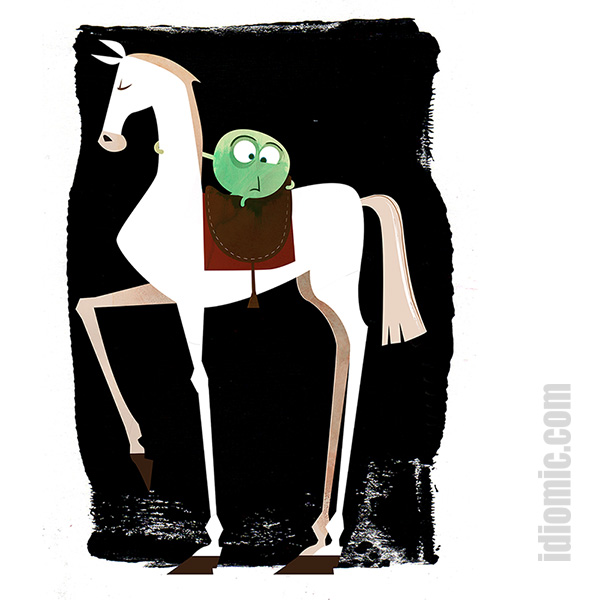 Definition :   To be self-righteous, superior, or haughty.

Example: Brenda got on her high horse, and told the ladies how the cupcakes had to be presented for the bake sale, with her pink monstrosities taking centre stage.

GET OFF YOUR HIGH HORSE

Example: The rest of the ladies told Brenda to get off her high horse and threw her cupcakes away.

In medieval times, a large horse was more commonly referred to as a ‘high horse‘. They were bred for this quality, and the larger or ‘higher’ the horse, the more expensive. Consequently, the size of your horse was an indicator of your rank. So, the wealthy and the aristocratic were literally on ‘high horses‘, looking down upon the common folk.

This has fallen out of fashion in our petrol age, though some folks have substituted four wheel drive vehicles instead. The ‘highest’ horse today would likely be the Hummer….

Definition: Somebody who comes to the aid of another, especially a man coming to a woman’s aid.

Example: Belinda’s knight in shining armour came in the form of a vending machine repairman. She’d had her arm caught in the machine for three hours. And she still hadn’t been able to reach that Mars bar.

A knight in shining armour (or armor if in the States) owes its existence to the romanticised ideals of Victorian painters, poets, and novelists. Tales of knights in gleaming suits of armour rescuing fair maidens from all manner of evil proved popular at the time, especially stories of Camelot and King Arthur. Everyone had a go. Le Morte d’Arthur was re-printed after an absence of centuries. Pre-Raphaelite painters like Edward Burne-Jones created images infused with light. Tennyson wrote romantic poetry about Arthur. Even Mark Twain visited the tale in a more satirical form with A Conneticut Yankee in King Arthur’s Court.

The reality was entirely different. Suits of armour rarely gleamed unless they were royal showpieces. They rusted. Their occupants washed infrequently. In the sunshine, the temperatures soared inside the suit. As it took ages to put armour on, those same occupants could not afford the time to take them off for toilet related activities. You could probably smell the knight coming before you heard the ragged breathing of his overloaded horse.

As for the damsels in distress… with all the various forms of pox, poor diet, and questionable personal hygiene of the age, Iddy’s not sure how fair they would have been…..

This idiom was requested by Carsten. Hope your students enjoy it!

Definition: Somebody disreputable, especially within a family

Example: Despite being a vicar, Roger was always considered to be the black sheep of the family. And all because he had stolen a chocolate bar when he was five.

‘Black sheep‘, unsurprisingly, comes from the appearance of black sheep within flocks. Black wool is a recessive genetic trait and their appearance within white breeds is rare. Generations past, this colouring was interpreted many ways. To a few, it was a good omen, but to the majority, it was seen as bad. Some even considered black sheep to be touched by the devil. Whatever the superstition, the wool was considered less valuable as it could not be dyed, and so a black sheep was less desirable than a white one.

Some sources also say that a poorly translated bible in 1525 didn’t help matters, speaking negatively of ‘blacke shepe amonge the lambes‘. By the way, its not poorly spelled as well. English is an ever evolving language, and that was the correct way of spelling in 1525.

There seems to be no connection between the idiom and the popular nursery rhyme ‘Baa baa Black Sheep’, and there are no racial slurs to be read into it either.

This phrase is one of the most widely adopted in languages across Europe from Spain to Denmark to Bulgaria, and almost everywhere inbetween.

Iddy was never described in this way by his relatives. He was the green ovoid of his family 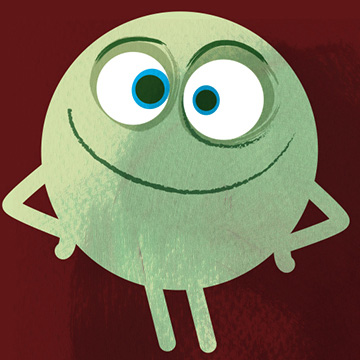 Iddy is happy to have been featured on two blogs in the past week….

Firstly, Idiomic.com was chosen as site of the day at The English Blog (www.englishblog.com). Check out the entry here. Thanks Jeffrey!

Secondly, BIG CHEESE has been featured on Mary’s English Blog (www.marysenglishblog.com). Check out the entry here. Thanks Mary!

Definition: The most important person/ the boss.

Example: Sir Bigglesworth-Smythe was a big cheese in the world of moustache grooming products, having created the world’s best-selling tash wax.

Big cheese has undergone a series of changes over the centuries. Originally, just a simple ‘the cheese’ meant something top notch. Even the word ‘cheesy’, which now represents something tacky and embarrassing, once meant something of quality.

In the early 20th century, big cheese stood for wealth or fame. It wasn’t until 1922 that its current usage came into being.

So Iddy, where did this ridiculous phrase come from in the first place?

Some attribute it to literal big cheeses created as showpieces in those same years of the 20th century.

A truly monstrous cheese was created in 1799 by dairy farmers from Cheshire, Massachussets and sent to President Thomas Jefferson as a gift. It weighed 1250 pounds, was four feet in diameter, and had to be carried in a wagon. Legend has it that it was still being served five years later. That’s a lot of cheese. Iddy’s not sure if this particular fromage gave birth to the idiom, but it’s a great anecdote nevertheless.

Some sources claim it derives from a Persian/Urdu word ‘chiz’, which means ‘thing’. It was probably absorbed into the UK English language by returning soldiers in the Victorian age and Indian emigrants in later decades. In this way, the phrase is a corruption of ‘big chiz’ or ‘big thing’.

Interestingly, big cheese can be used with respect (though quite informally), or in a sarcastic way. If somebody calls you a big cheese, listen carefully to their tone!