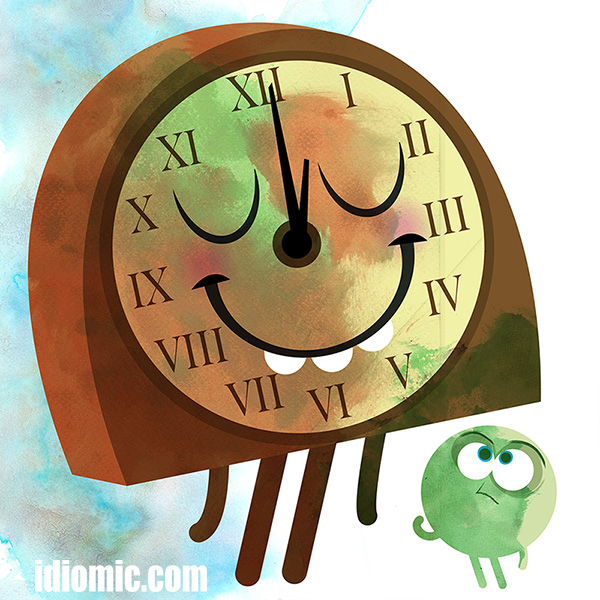 Definition: To be successful

Example: When Ruby’s album of ukulele cover songs sold more than a dozen copies, she knew she had hit the big time.

‘Big time‘ probably had its origin in late nineteenth century Vaudeville theatre. Performers were rated by popularity. ‘Small time‘ performers were just starting out or at the end of their careers. ‘Big time‘ performers were at the height of their popularity and were the headliners on the bill. These more popular artists spent longer on the stage than their counterparts, so they literally had ‘bigger time’ on stage. Please excuse Iddy’s poor English there. “Longer time’ would be grammatically more acceptable, but wouldn’t explain the situation as clearly.

Iddy’s probably been a bit pre-occupied to worry about his grammar. He’s been wondering how to wind up this particular clock.

Definition: having too much to do

Example: Steve would have loved to attend the all night screening of Sex and the City episodes with his wife, but unfortunately he was snowed under at work and wouldn’t be home in time. Poor Steve.

There doesn’t seem  to be any fancy origin for snowed under. It simply describes the feeling of being smothered or crushed by the weight of work. Just like you would under a heavy snowfall. That’s it.

In a little sidebar about snow related terms, the word ‘blizzard’ was around for many years before it had anything to do with snow. It originally meant a sharp blow or a gunshot. No snow in sight. It wasn’t until 1870, when an Ohio newspaper described a particularly bad snowstorm as  a ‘blizzard’, that the word took a right hand turn into a different meaning.