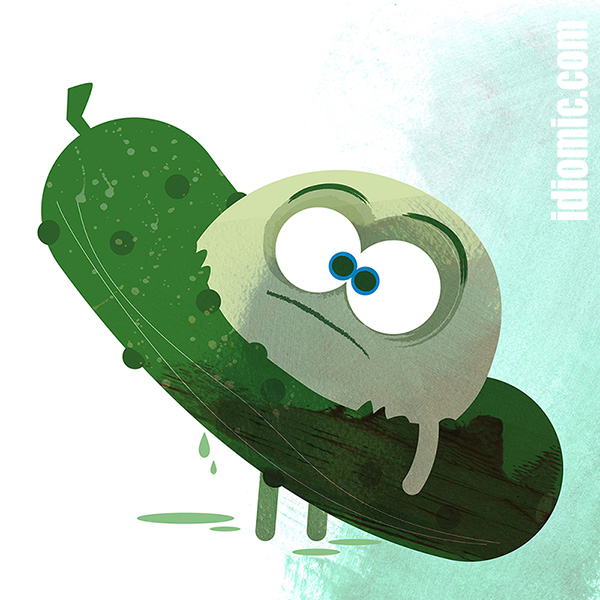 Definition: To be in difficulty.

Example: Archie was in a bit of a pickle after asking both Betty and Veronica to the Riverdale Dance. Good ol’ Archie. He never learns…

The pickle referred to here is the saucy, sometimes spicy condiment popular in the UK and India, not the little cucumbers in vinegar more popular in the US. Sorry, Iddy. You’re using the wrong one there!

To be precise, it refers to the stewed fruits that make up a pickle. Like that fruit, the unfortunate individual ‘in a pickle‘ is entirely disoriented and mixed up. It’s closely related to the nineteenth century idiom ‘in a stew’. Same idea. Same meaning.

There is another, more grisly explanation kicking around, but it is thought to be untrue. It claims that the phrase comes from gruesome tales of bodies being pickled for preservation in centuries past. Yes, much more lurid and much more interesting. But not a shred of evidence to support it.

It certainly does not relate to a specific case, that of Admiral Horatio Nelson. Some claim he was pickled after his death at the  the Battle of Trafalgar in 1805, so his body could be returned to England. But he wasn’t. To be a stickler about picklers, Nelson wasn’t pickled at all. He was preserved in brandy.

Sometimes the idiom is used in a slightly expanded version: ‘in a pretty pickle‘. Iddy doesn’t think there’s anything pretty about it at all…